Because of the heterogeneity of the lesions, and in some cases because of the internal hematomas and edema, measures to reduce peripheral swelling or vasoconstriction are particularly important.

In this article, the author presents a practical case study on the daily use of intermittent vacuum therapy (IVT) in athletes with torn muscles of various sizes in the rectus femoris muscle of the dominant leg. Conservative treatment was applied to each athlete in the initial phase, followed by clinical exercises until the final recovery phase.

In IVT, negative pressure (vacuum) and positive pressure are alternately applied to the lower limbs and the abdominal region in order to increase capillarization as well as venous and lymphatic return. The central nervous system is also stimulated by this technique. Since there is no direct compression, the treatment is completely painless regardless of the injury or its stage.

The main areas of application of the lower body negative pressuere device and flow regeneration system developed at the German Aerospace Center (DLR) are cardiovascular stimulation and revascularization. IVT is also recognized as a modern and economical form of treatment for lymphedema  and lipedema.

The new method is also used differently to promote post-traumatic and post-operative rehabilitation (VACUSPORT device) and has been known to be very effective for traumatic sports injuries for several years.

When the vacuum pump is switched on, an alternating pressure difference consisting of negative and positive pressure is applied to the lower body in a chamber. This leads to a rhythmic capillary dilation and compression in the lower part of the body and thus optimizes the blood circulation in this area.

Group of 10 athletes, divided into five comparable pairs, each with the same rupture. In each couple, one used vacuum therapy and the other did not. The cracks were (2.4 cm; 1.8 cm; 1.4 cm; 1.0 cm and 0.8 cm) long. All cracks were diagnosed by imaging, in this case ultrasound. All received the same conservative treatments, one of each couple receiving IVT daily for 45 minutes and the other not. In this way, deviations were avoided.

It took about 1.5 years to run the study until we saw athletes with the same incidence of injury to make comparisons. It has been verified that the inclusion of IVT in muscle regeneration is a benefit. This applies to the shortening of the rehabilitation time and the time saved compared to other athletes. It should be noted that the healing gains are greater, the greater the muscle injury with the associated edema. This study was carried out in a clinical context. Just like the literature, this study shows that not all bodies respond in the same way to the same stimulus. However, we need to deepen these studies and application techniques so that the evidence on the benefits of recovery with the introduction of IVT becomes an accepted reality. 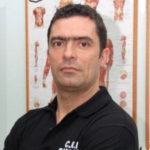