Polyarticular arthritis of both hands

The patient first presented in February 2019 approximately 3 months after full manifestation of characteristic symptoms with pain and swelling in individual finger joints. There was a history of the disease in both the mother and grandmother, the disease fully manifesting in both at approximately 50 – 55 years of age.

The findings of the thorough clinical examination conducted at first presentation were as follows:

Marked swelling in both hands with more pronounced swelling in individual finger joints, particularly in the metacarpophalangeal (MCP) joints. Severe pain in these joints on pressure, e.g. when shaking hands (VAS 9 – 10) and on movement (VAS 6 – 8); full extension of fingers not possible or only with pain. Flexion restricted, complete closure of the fist not possible due to pain and swelling. Early deformation of the DIP joint of the left index finger. Blood circulation, motor skills, sensitivity without findings, no numbness or paraesthesia of the hands. The patient was unable to wear her wedding ring at first presentation.

Due to the history and identical symptoms of her mother and grandmother, the patient declined to have an X-ray examination or MRI scan for further clarification. However, the clinical signs and massive discomfort provided and provide clear evidence of familial polyarticular arthritis. The patient had been previously treated with just various NSAIDs, novaminsulfone drops, paracetamol, vitamin D, hot and cold hand baths, squeeze balls and rest. Under this treatment, the patient was never without pain and the fingers were always swollen. She usually needed to spend about 10 minutes every morning exercising her fingers to improve mobility and be able to start work.

Normally at this point, options for further treatment would primarily include a period of unloaded rest, cortisone (topical and oral), physiotherapy, further intake of high dose NSAIDs and, where applicable, even treatment with methotrexate. However, as the previous treatment had been unsuccessful in all respects, in close consultation with the patient we opted for radial extracorporeal shockwave therapy (rESWT), which was then combined in the further course with high-energy laser treatment. We know of many cases of patients with polyarticular arthritis where ESWT had very often rapidly alleviated pain even when the polyarthritis had previously been refractory to treatment. Unfortunately, however, there are to date no conclusive scientific studies on the successful effect of radial shockwave therapy in polyarticular arthritis of the hands. Similarly, there are no scientific studies on combination therapy with high-energy laser λ = 905 nm and ESWT.

The rESWT was performed using a Swiss Dolor­Clast device (Electro Medical Systems; Nyon, Switzerland) and the EVO Blue handpiece (36 mm applicator). The laser is a high-energy pulsed laser with a wavelength of λ = 905 nm and 300 W maximum output. At the start of treatment in February 2019 approx. 5000 rESWs (radial extracorporeal shock waves) were applied per hand at 0.3 bar (36 mm applicator) around the MCP joints, then the fingers, followed by the palms and the carpometacarpal joint of the thumb. The rESWs were always applied at 20 Hz, i.e. 20 rESWs per second, and always at the end also as a form of deep lymphatic drainage massage, moving the handpiece always from distal to proximal over the carpal tunnel. Treatment was initially performed weekly. From the third treatment session onwards, we were able to increase the working pressure to 0.6 bar, and the patient reported a distinct improvement in pain and swelling, and after the fifth session was even able to wear her wedding ring again. However, in the more severely affected left hand the working pressure could not be increased beyond 1.2 bar and in the less affected right hand beyond 1.6 bar. The patient was then fully without pain for approx. 3 weeks before the swelling and pain returned.

At the start of July 2020, we had the opportunity to attempt combination therapy with high-energy laser (λ = 905 nm) and rESWT. After a 3-minute anti-inflammatory laser programme (applied using a flexible arm) applied to the 2 – 3 main pain areas in the more severely affected left hand, we were immediately able to increase working pressure up to 2.0 bar after a five-minute break and continued to apply rESWT at the usual 1.5 – 1.6 bar in the less affected right hand. The effect on the left hand was immediately felt to be greater according to the patient and the pain relief induced by rESWT even markedly better than before.

At follow-up after 5 weeks the otherwise worse left hand was still very good, whilst the patient was once again already experiencing pain in the right hand.

At the next treatment session, a break of 1 hour was observed between the laser and rESWT treatments, which enhanced the effect even more! We were able to apply rESWT this time at 2.5 bar in the left hand and at 2.4 bar in the right hand (this time also preceded by laser treatment). The follow-up this time after 8 weeks (05.10.2020) was reason to celebrate, as the patient even after this length of time was still without pain and the hands were no longer swollen and were freely movable.

Radial shockwave therapy is a very successful and reliable treatment option for polyarticular arthritis und has proved itself countless times in our practices. The combination of high-­energy laser at λ = 905 nm and subsequent rESWT can markedly further enhance the positive effect. This is due to the pain-allevia­ting effect of the laser, which would be comparable to that of topical ibuprofen. As a result, subsequent rESWT can be performed at a markedly higher working pressure and thus a stronger and markedly longer lasting effect can be achieved. The two treatment modalities should ideally be applied 1 hour apart, but the effect can be already observed, albeit weaker, after a break of 5 minutes. This combination treatment allows, for example, chronic symptoms of polyarticular arthritis to be treated significantly even more effectively and longer lasting than before. 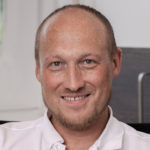