Timing of Creatine Supplementation Around Exercise 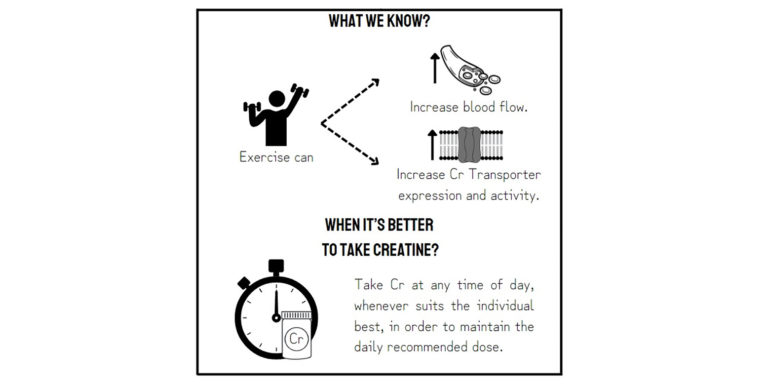 Chronic creatine supplementation increases muscle creatine stores, and several factors have been identified that may modify this intramuscular increase and subsequent performance benefits, including baseline muscle Cr content, type II muscle fiber content and size, habitual dietary intake of Cr, aging and exercise. Recently, timing of creatine supplementation in relation to when exercise is performed has been proposed as an important consideration to optimize muscle loading and performance gains, as research has shifted towards comparing supplementation strategies that provide creatine pre-, during or post-exercise. Here we discuss the most recent scientific research, what it means and how to implement it.

Creatine (Cr) supplementation in doses of 5 – 20 g/day for >5 days has consistently shown to increase intramuscular Cr and Phosphorylcreatine (PCr). It is the increase in PCr that is associated with the main mechanism of action regarding the beneficial effect of Cr supplementation for sports practitioners. In a nutshell, Adenosine Triphosphate (ATP) is our „energy coin“ which contributes to the energy provision and generation in skeletal muscle and we know that Cr supplementation can consequently increase ATP resynthesis. This enhancement of the capacity of ATP resynthesis should increase available energy during exercise, prolonging the work capacity of skeletal muscle, delaying the onset of muscle fatigue and improving performance. However, several factors can influence increases in PCr with Cr supplementation.

Several factors have been shown to modify the effect of Cr supplementation on muscle Cr content. The daily dose and duration both play an important role in how quickly and how much Cr stores are increased. A more gradual dosing strategy of 3-5 g/day leads to similar maximal increases of muscle Cr stores as 20 g/day for 5 days, but over a longer period (20-28 days). Greater increases in muscle Cr are shown in those with lower initial muscle Cr content like vegans and elderly, while carbohydrate co-supplementation may increase Cr uptake into muscle, accelerating the saturation of muscle Cr.

Exercise has also been shown to enhance Cr uptake into muscle. Thus, exercise appears to enhance the accrual of intracellular Cr with Cr supplementation, although the importance thereof will likely be linked to the daily dose employed. Since high doses (20 g/day) lead to saturation in as little as 5 days, it seems unlikely that quicker loading will have much impact on exercise outcomes. However, supplementation can be prescribed more gradually, as with doses of 3-5 g/day over 20-28 days. With a lower dosing strategy like this, enhanced muscle uptake might accelerate the speed at which Cr saturation is reached in muscle, resulting in quicker and greater benefits to exercise.

We know that several factors have been identified that may modify this intramuscular increase and subsequent performance benefits, including baseline muscle Cr content, type II muscle fiber content and size, habitual dietary intake of Cr, aging and exercise. The influence of exercise on Cr loading is apparent; however, more recent investigations have suggested that the timing of Cr supplementation in relation to the exercise bout may be important, too. To better understand why timing of supplementation in relation to exercise might be important, it is important to appreciate how exercise might enhance Cr uptake, which will be discussed in the following section.

How creatine timing around exercise may influence subsequent loading

Recently, timing of Cr supplementation in relation to exercise has been proposed as an important consideration to optimize muscle Cr loading and performance gains, although current consensus is lacking regarding the ideal ingestion time. Cr pre-, during or post-exercise: is there an ideal timing of intake?

Cr needs to be transported into the muscle cell where it can perform its work. This transport into muscle cells is performed by the specific Cr transporter, CreaT, whose activity is increased with muscle contraction meaning supplementation around exercise might alter uptake. However, there is an exercise effect after the workout that could last for several minutes up to 48 h post-exercise, meaning that pre-, intra- or post-exercise Cr supplementation might not matter. Furthermore, most individuals taking Cr supplements undertake regular exercise training, which chronically upregulates this transport activity. So, it is possible that timing in relation to each exercise session may not be important.

Timing of creatine supplementation at a glance

There is evidence suggesting greater benefits on muscle mass when creatine is consumed after exercise compared to pre-exercise consumption, although methodological limitations currently preclude solid conclusions [1]. But most of the emerging research indicates that it does not matter if you supplement pre- or post-workout [2], gains in performance are similar. Although exercise appears to enhance Cr uptake in muscle with Cr supplementation, evidence supporting the importance of timing of Cr supplementation around exercise is currently limited to only a few studies, none of which showed superior gains in exercise performance when Cr was ingested pre- or post-exercise. 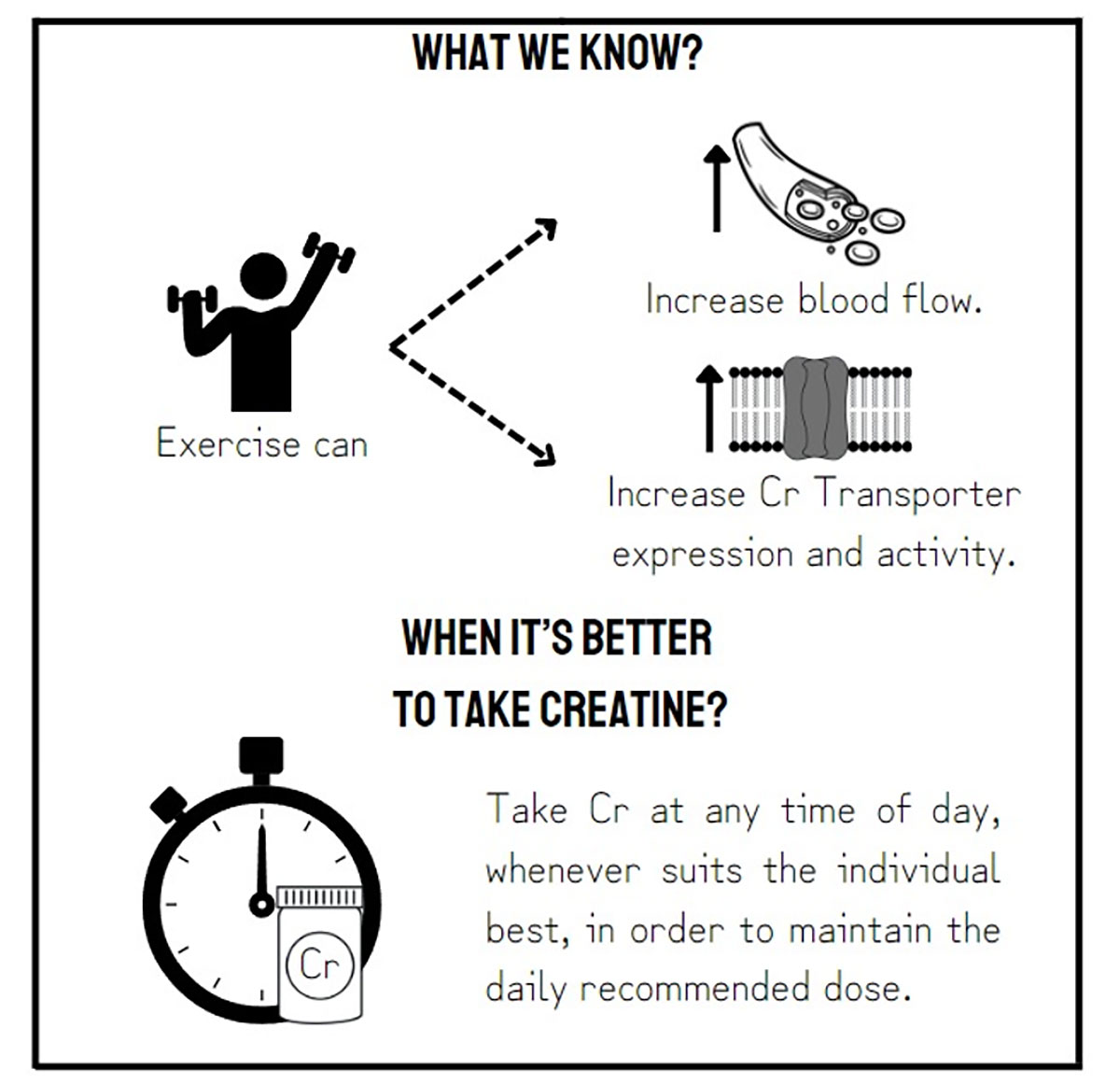 As it stands, adapting Cr timing specifically according to when training is performed is not currently supported by solid evidence and should not be considered a real concern for now. Any claims that timing of creatine supplementation around exercise moderates gains in muscle creatine and exercise performance should not be considered based upon solid research. If you take Cr pre-, intra- or post-workout, it does not matter, just take Cr daily in order to maintain the daily recommended dose. 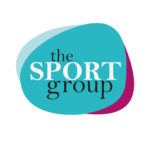 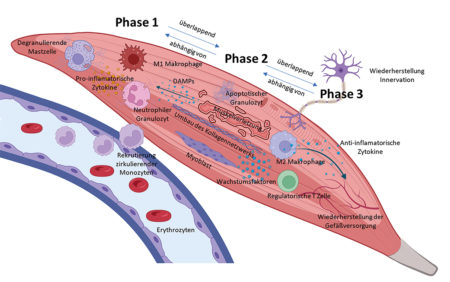 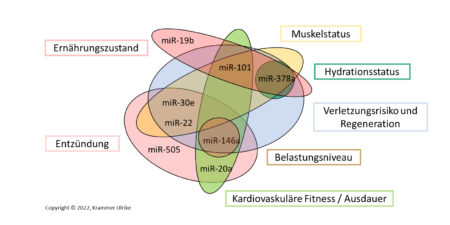 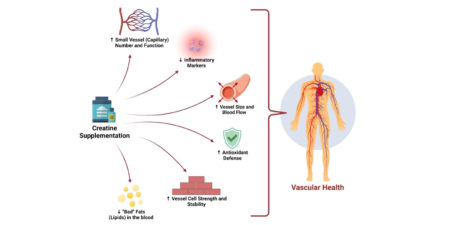 The Potential Role of Creatine in Vascular Health